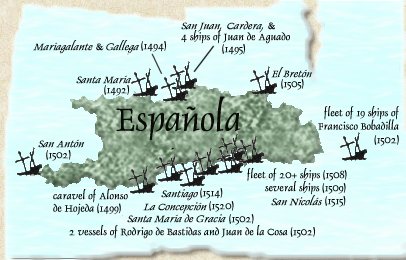 The island was the jumping off point for much of the exploration of the Gulf and Caribbean. As a result the number of ship losses around this island alone, beginning with the famous loss of Columbus’ Santa Maria in 1492, is over 30.

When Columbus took possession of the island in 1492, he named it Insula Hispana in Latin and La Isla Española in Spanish, with both meaning “the Spanish island”. De las Casas shortened the name to Española, and when d‘Anghiera detailed his account of the island in Latin, he rendered its name as Hispaniola. In the oldest documented map of the island, created by Andrés de Morales, Los Haitises is labeled Montes de Haití (Haiti Mountains), and de las Casas apparently named the whole island Haiti on the basis of that particular region.

Because of Taíno, Spanish, and French influences on the island, the whole island was referred to as Haiti, Hayti, Santo Domingo, St. Domingue, or San Domingo. The colonial terms Saint-Domingue and Santo Domingo are sometimes still applied to the whole island, though these names refer, respectively, to the colonies that became Haiti and the Dominican Republic. Since Anghiera’s literary work was translated into English and French soon after being written, the name “Hispaniola” became the most frequently used term in English-speaking countries for the island in scientific and cartographic works.

The name Haïti was adopted by Haitian revolutionary Jean-Jacques Dessalines in 1804, as the official name of independent Saint-Domingue, as a tribute to the Amerindian predecessors. It was also adopted as the official name of independent Santo Domingo, as the Republic of Spanish Haiti, a state that existed from November 1821 until its annexation by Haiti in February 1822.