In September 1493, Columbus set sail on his second voyage. But instead of the tiny fleet of his first voyage, he led 17 ships and nearly 1200 people!

Returning to Haiti and finding La Navidad destroyed, Columbus then sailed more than 100 kilometers (62 miles) eastwards along the northern coast of Hispaniola, in the present day Dominican Republic, establishing a new settlement in Bahía Isabela that he called La Isabela.  However, La Isabela proved to be poorly located and the settlement was short-lived.

In 1494 and 1495, hurricanes struck the settlement destroying at least eight ships including the flagship Maríagalante, the nao Gallega, and the caravels Cardera, and San Juan. Only Niña survived the disasters. No wonder it was Columbus’s favorite vessel.

Areal view of the settlement of La Isabela on the tip of the small peninsula at the north end of the bay.

Some documents suggest that two, to as many as four, of the ships that were destroyed in the hurricanes of 1494 and 1495 were salvaged and used to construct new ships to move colonists to Santo Domingo. Another document suggests that after one of the hurricanes a 50-ton caravel named India was built from the timbers of two wrecked vessels and it was used on a return voyage to Spain[1]. Two and possibly four vessels out of the eight or nine that sank may no longer remain in the bay. It is possible, however, that four or five vessels, including the Mariagalante, may be present. 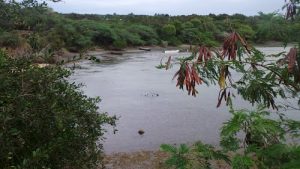 View of the bay to the south of La Isabela

Several expeditions have searched in vain for the lost ships that lie buried under at least three meters of mud, dead coral, and debris. While the thick blanket of sediments is difficult to penetrate, it would preserve organic materials very well.