Columbus made a fourth voyage, nominally in search of a westward passage to the Indian Ocean. Accompanied by his stepbrother Bartolomeo, Diego Mendez, and his son Fernando, he left Cádiz, Spain on May 12, 1502, with his flagship, Capitana, as well as the Gallega, Vizcaína, and Santiago de Palos. He sailed to Arzila on the Moroccan coast to rescue the Portuguese soldiers who he heard were under siege by the Moors. On June 15, 1502, they landed at Carbet on the island of Martinique (Martinica). A hurricane was brewing, so he continued on, hoping to find shelter on Hispaniola. He arrived at Santo Domingo on June 29, 1502, but was denied port, and the new governor refused to listen to his storm prediction. Instead, while Columbus’s ships sheltered at the mouth of the Jaina River, the first Spanish treasure fleet sailed into the hurricane. The only ship to reach Spain had Columbus’s money and belongings on it, and all of his former enemies (and a few friends) had drowned, including Francisco de Bobadilla, who’d had Columbus sent back to Spain in chains two years earlier.

After a brief stop at Jamaica, he sailed to Central America, arriving at Guanaja (Isla de Pinos) in the Bay Islands off the coast of Honduras on July 30, 1502. Here Bartolomeo found native merchants and a large canoe, which was described as “long as a galley” and was filled with cargo. On August 14, 1502, he landed on the American mainland at Puerto Castilla, near Trujillo, Honduras. He spent two months exploring the coasts of Honduras, Nicaragua, and Costa Rica, before arriving in Almirante Bay, Panama on October 16, 1502.

In Panamá, he learned from the Ngobe of gold and a strait to another ocean. After some exploration, he established a garrison at the mouth of Belén River in January 1503.

By April 6, soldiers captured the local leader El Quibían, who demanded they not go down the Belén River. El Quibían escaped, and returned with an army to attack and repel the Spanish, damaging some of the ships. On April 16, 1503 Columbus abandoned the damaged Gallega (on a sandbar in the river) and a week later (April 23) Vizcaína was abandoned in Portobelo, Panama. In both cases the ships were beached and what could be salvaged by Columbus’ crew was removed.

For a year Columbus and his men remained stranded on Jamaica. A member of the crew, Spaniard Diego Mendez, and some natives paddled a canoe to get help from Hispaniola. The island’s governor, Nicolás de Ovando y Cáceres, detested Columbus and obstructed all efforts to rescue him and his men. In the meantime, Columbus amazed the natives by correctly predicting a lunar eclipse for February 29, 1504, using the Ephemeris of the German astronomer Regiomontanus.[65]

Help finally arrived, from the governor, on June 29, 1504, and Columbus and his men arrived in Sanlúcar de Barrameda, Castile, on November 7. Columbus died in Valladolid, Spain, on May 20, 1506, at around the age of 54, from what is believed to be the effects of chronic reactive arthritis perhaps acquired secondarily to food poisoning.

The Search for Capitana and San Juan 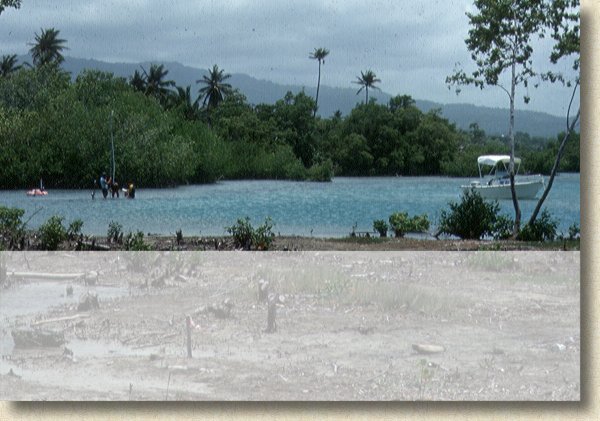