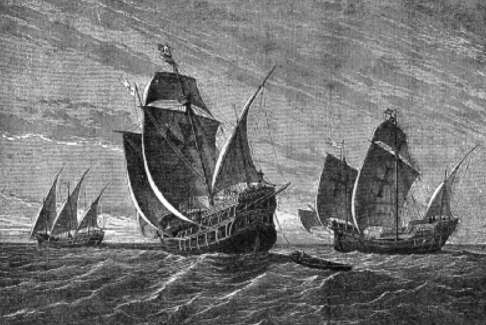 La Santa María de la Inmaculada Concepción (Spanish for The Saint Mary of the Immaculate Conception), was the largest of the three ships used by Christopher Columbus in his first and most famous voyage.

Santa María was probably a medium sized nao (the type is also referred to as a nau or carrack), about 60 feet long on deck, “very little larger than 100 toneladas” (100 tons),[1] and was used as the flagship for the expedition. The Santa María had a single deck and three masts.

In Portuguese this type was called nau while in Spanish it was called carraca or nao. In French it was called a caraque or nef.  They were three- or four-masted sailing ships developed in 15th-century Western Europe for use in the Atlantic Ocean. These ships had a high rounded stern with large aftcastle, forecastle and bowsprit at the stem. It was usually square-rigged on the foremast and mainmast and lateen-rigged on the mizzenmast. They were the ships in which the Portuguese and the Spanish explored the world in the 15th and 16th centuries.

The other ships of the Columbus expedition were the smaller caravel-type ships Santa Clara, remembered as La Niña (The Girl) was approximately 16 feet wide and 50 feet long, and La Pinta (The Painted One) was approximately 17 feet wide and 55 feet long[1]. Both of these ships were second-hand and were never meant for specifically for exploration. Niña, Pinta, and Santa María were modest sized merchant vessels that were built to sail the Mediterranean Sea, not the open ocean.

Although it was the slowest of the three ships, Santa María performed well in the Atlantic crossing. It ran aground off the present-day site of Cap-Haïtien, Haiti on December 25, 1492, and was lost.[1] Realizing that the ship was beyond repair and unable to take the entire crew back to Spain in Pinta and Niña, Columbus ordered his men to strip the timbers and build a small fortress he called La Navidad. On January 15, 1493, he set sail for home aboard Niña leaving 39 men behind.

A number of expeditions have searched for the remains of Santa Maria. Famous historians have claimed to know where it is. Some adventurers have even claimed to have located the wreck, but nothing has ever come of any of these assertions and the wreck remains lost.