Excavation is just the beginning of a shipwreck project. Many years of conservation and research are necessary to understand and interpret the site.

Large objects—such as cannons and anchors—taken from the sea may be recognizable. However, many objects are concreted together. They must be separated, and the outer crust of marine sediments and organisms removed. In other words, the real excavation takes place in the laboratory.

Concretions are not just lumps of concretion and rusted iron, but small archaeological sites in their own right. X-rays help to reveal what is hidden, careful drawings of each object’s location establishes the relationship between objects and possibly their use. Each one must be painstakingly “excavated” to reveal its artifacts.

Often artifacts have completely deteriorated before removal from the sea, leaving only a hollow shell of concretion. Luckily, that shell often can be used as a mold to replicate and rediscover the long-since vanished artifact.

A good example of rediscovery in the lab is the tailor’s kit from the Molasses Reef Wreck.  The scissors were gone, but the lead marker, sharpening stone, and the thimble survived. These everyday objects open a window into the past and the lives of the sailors who lived on the ships.

If an object is not identified by its gross shape while still covered with concretion, it can usually be recognized once it is cleaned. Objects often have maker’s or guild marks, taxation stamps, and the like that help identify exactly when and where they were made. These steelyard weights have some important clues in the stamps on their surface. 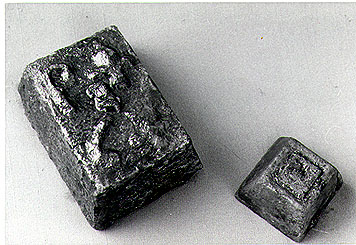 Other times, simple comparison with other known objects can provide an identity, a time, and a place for the object. Sometimes, though, the magic doesn’t work, and where an artifact is from, when it was used, or even what it is remains a mystery.

Discoveries in the lab often lead to surprising artifact analysis results. But before you can analyze you have to conserve each object. And each material requires a different conservation approach.