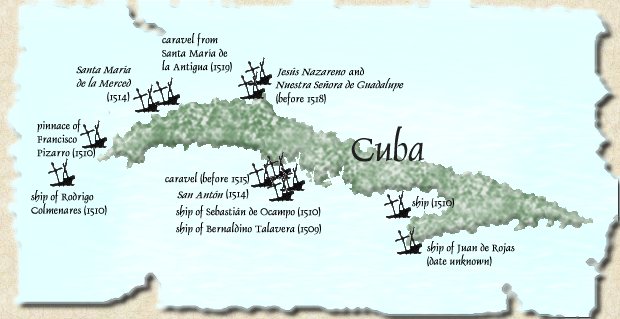 Cuba was the an important landfall on Columbus’ first voyage. The island quickly became a hub of Spanish activity (see More About Cuba). At least 12 ships were lost by 1521:

After first landing on an island then called Guanahani, Bahamas, on October 12, 1492, Christopher Columbus with his ships: La Pinta, La Niña and the Santa María, landed on Cuba’s northeastern coast on October 28, 1492. (This was near what is now Bariay, Holguín Province.) Columbus claimed the island for the Kingdom of Spain and named it Isla Juana after Juan, Prince of Asturias.

In 1511, the first Spanish settlement was founded by Diego Velázquez de Cuéllar at Baracoa. Other towns soon followed, including San Cristobal de la Habana, founded in 1515, which later became the capital. The native Taíno were forced to work under the encomienda system, which resembled a feudal system in Medieval Europe. Within a century the indigenous people were virtually wiped out, primarily from Eurasian infectious diseases, to which they had no natural resistance (immunity), aggravated by the harsh conditions of the repressive colonial subjugation system. In 1529, a measles outbreak in Cuba killed two-thirds of those few natives who had previously survived smallpox. Read more about Cuba