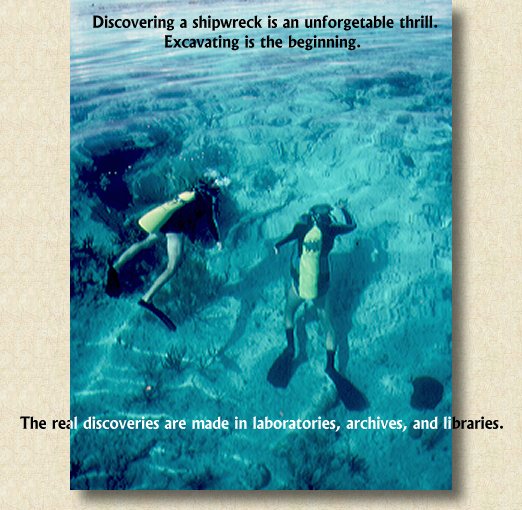 Little did we know that it was the oldest shipwreck ever discovered in the Americas. What were the clues?

The ship that wrecked on Molasses Reef is an example of one of the first truly sea-going ships: The product of thousands of years of evolution in nautical design to meet the challenge of the vast and forbidding Atlantic Ocean. 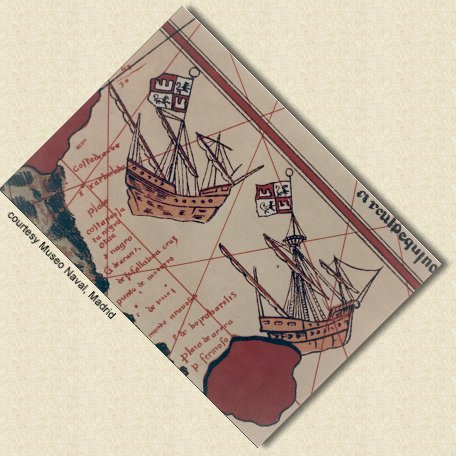 These ships appear on the Juan de la Cosa map of 1500, the earliest map of the New World. They give us some idea of how the ships that conquered the Ocean Sea looked, but the hull remains, ballast, and hardware recovered from the Molasses Reef enables us to ghost in some of the missing pieces. 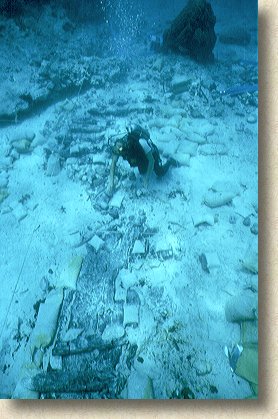 Only about 1% of the Molasses Reef ship’s hull was preserved. Shipworms and the relentless sea long ago carried away everything that was not protected beneath the artifacts and the 42 tons of stone ballast in the hold. No trace of the cargo survived.

The table below shows the date ranges (when they first appeared and when they fell into disuse) for various artifacts found on the ship. The vertical line between 1510 and 1520 intersecting all of the date ranges represents the most likely date for the sinking of the ship. 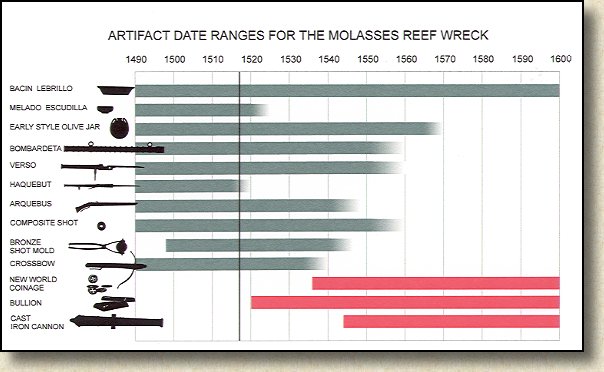 History records the loss of more than 112 ships in the Americas between the first voyage of Columbus in 1492 and 1520. Few ship losses are recorded in the Lucayan Islands (Bahamas and Turks and Caicos Islands) during this period. In all probability, the Molasses Reef ship sank without attracting the notice of history.

The fragments of European pottery on board are typical of types made in Spain and Portugal during the late 15th and early 16th centuries: “olive jars,” escudillas (bowls), and lebrillos (basins). Because the Portuguese were not in these waters at that time, the ship was almost certainly Spanish. 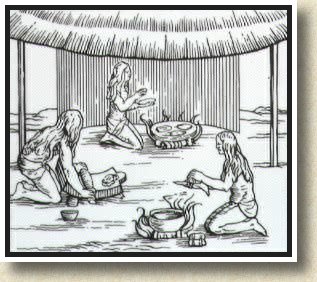 A people known as the Lucayan Tainos inhabited the Bahama and Turks and Caicos Islands when Columbus arrived in 1492. Within the first 20 years of European contact, disease and slaving forays had virtually eliminated these people. There is no precise date for the Lucayan Tainos’ extinction, but Ponce de León reported encountering only one Indian when he passed through the Bahamas in 1513 on his way to “discovering” Florida.

The location of the Molasses Reef wreck is an important clue to the ship’s mission and identity. The first Spanish colonies in the New World were located along the north coast of the island of Hispaniola; Molasses Reef lies directly between them and the open sea. Early maps show that Spanish navigators knew the location of—and had often visited—the Turks and Caicos Islands. The purpose of such voyages was to capture Indians to work in the mines and fields of Spanish Hispaniola. Was the ship that came to grief on Molasses Reef engaged in this heinous enterprise?

The evidence is still circumstantial, but the case is growing: Several sets of leg irons, some of them locked, were probably part of the ship’s normal complement of disciplinary gear, or were used to immobilize captives.

The absence of trade goods or any evidence of cargo implies that whatever the ship was carrying floated off or disintegrated completely. The absence of personal items and navigational equipment indicates that most of the crew survived the wreck and managed an orderly abandonment of their vessel.