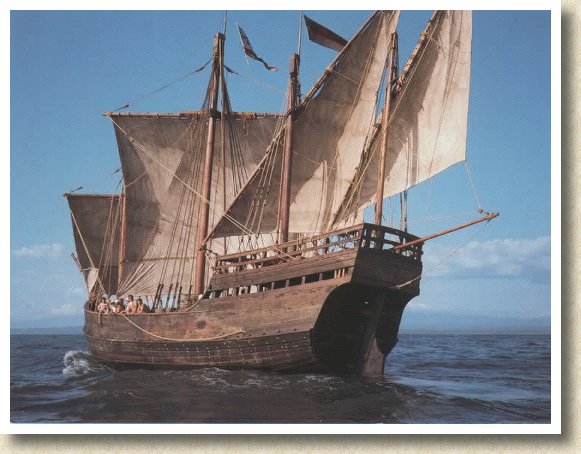 Perhaps the most important scientific reconstruction of a discovery-era ship was Santa Clara built by John Sarsfield. Prior to the development of lines plans, ships built on the Mediterranean coasts in the 15th and early 16th centuries regularly used a technique called Mediterranean whole moulding to determine frame size and shape. The method fell out of use in the 16th century.

Sarsfield was an avid sailor and boat builder and his curiosity about the technique soon became an obsession. He combed historical sources, tapped the knowledge of maritime archaeologists, and carried on a lively correspondence with  experts on both sides of the Atlantic. While working in Brazil in 1980, he discovered that the whole moulding technique was still in daily use in the shipyards of Valenca on the coast of Bahia.  Over time he slowly gained the confidence of Valençan shipwrights who shared their knowledge. Finally John was satisfied that he had learned enough to attempt a full-size, working reconstruction. He secured financial support from the Columbus Foundation of St. Thomas, US Virgin Islands, and began construction of a 15th-century Iberian caravel in 1989.

John Sarsfield inspecting a frame element for Santa Clara. The ship under construction is visible in the upper right. Photo by Toni Carrell, Ships of Discovery.

Sarsfield methodically incorporated information from archaeological sites and 16th century ship building treatises. The dimensions of the ship were not from a single source but were distilled from the remains of the Highborn Cay and Molasses Reef shipwecks, thought to date to the early 16th century.

Tragically, John was killed in an automobile accident in July 1990 before the ship was finished. Fortunately Ships of Discovery personnel visited Valenca on two occasions while the ship was under construction to photograph and document the work and construction techniques. A selection of images from those visits is provided in the accompanying slideshow.

To set his endeavor apart from the numerous past and present celebratory reconstructions of Columbus’ Niña, Pinta, and Santa María, Sarsfield christened his replica Santa Clara, the official name of Columbus’s favorite vessel, Niña. Santa Clara was finished in December 1991. Santa Clara left the banks of the Rio Uno in Valenca, Brazil rigged as a four-master with a crew of eleven arriving in Puntarenas, Costa Rica on January 23, 1992 to take part in the film 1492 directed by Ridley Scott and starring Gerard Depardieu. Its voyage of over 4,000 miles represented the first time that a discovery caravel replica made a successful unescorted open ocean passage of any considerable distance. The ship continues to tour; for more information visit the Columbus Foundation website.

Nance, Jonathan M. 1992. The Columbus Foundation’s Niña: A report on the rigging and sailing characteristics of the Santa Clara. International Journal of Nautical Archaeology 21, no. 4:295-307.

About Reconstructions: An Important Source of Information

Ship reconstructions are an important avenue to study the development of shipbuilding techniques from the earliest reed craft to the warships of the 19th century. The purposes of these projects are often quite different. Most are built to commemorate an event; Nelson’s HMS Victory at the Battle of Trafalgar in 1805. Less common they are built to engage in experimental archaeology; how well did it sail? how fast could it go?

The quality of the projects varies widely from the use of modern materials and tools to the use of ancient tools and authentic materials. These latter, scientific reconstructions, can reveal much about the skill of the shipwright, the mind of the designer, and the viability of traditional construction methods. But what to call the resulting modern construction?

Is it a Replica? Or a Reconstruction? Or a …?

The terms “replica,” “reconstruction,” “reproduction,” and “re-creation” appear with some regularity in the popular press and media, particularly when a group is seeking to build a ‘modern’ version of ship that was famous in the past. Used interchangeably,  the terms have very distinct meanings among archaeologists, historians, and museum curators.

As the 1992 celebrations of Columbus’ first voyage to the Americas were heating up, so too was the debate over terminology and the race to complete ‘modern’ versions of ships representing the Nina, Pinta and Santa Maria. In an effort to bring some clarity, the International Journal of Nautical Archaeology (IJNA) provided working definitions (1993, 22.3:197), taking into account the dictionary and legal definitions.

Replica: Copy of surviving vessel using the materials and techniques observed in the original and to the same scale.

Reconstruction: A vessel constructed based on the evidence from surviving elements using the form, dimensions, materials, and technology originally used.

Reproduction: A vessel based on available evidence for size and form but using any materials.

Re-creation: A vessel based on slight evidence, the size is immaterial and usually involves the active reliving of the past.

Most archaeologists use the term ship reconstruction  when referring to a scientifically-based project.