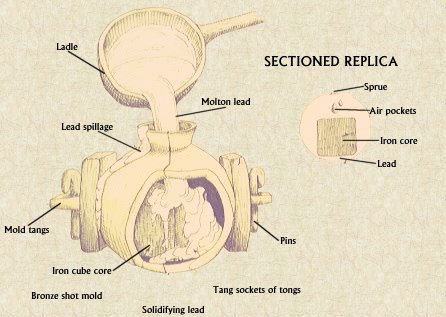 Finding a shipwreck is exciting. Excavating it is an adventure. Conserving it is a long labor of love. But replicating artifacts, then experimenting with the results, is the most intriguing. Scattered among the artifacts of the Molasses Reef Wreck, we found bronze shot molds, long-handled tongs, a number of enigmatic iron cubes, lead scrap, and dozens of lead/iron composite shot.

After years of research in the conservation lab and the library, we realized that with these items explorers could replenish their supply of shot. The iron core was placed inside the bronze shot mold, the mold secured with the tongs, and molten lead poured into the mold. Before our discovery, archaeologists thought the lead was wrapped and beaten around the iron core—an interpretation that now sounds absurd.

We also experimented with crossbows based upon a few fragmented remains found on several 16th-century shipwrecks. We enlisted David Watson of New World Arbelists to construct the replicas.

Once the crossbow was finished, were struck by its small size. A bow of this size might shoot 250 yards and be effective at 50 yards. At 250 yards, the bow would be deadly on an unarmed target, but it would be hard to hit anything smaller than a ship at that range.

The presence of light crossbows on ships is understandable in light of 16th-century naval tactics. Most fighting was at close range, ship to ship, or from one part of the ship to another. Most people in this situation would be lightly armored or not at all. A semi-trained seaman, instead of a well-trained bowman, could still be useful with the crossbow because he would be fighting at close range.

Experimental archaeology, like building ship replicas, is an important and often overlooked tool for archaeologists to understand the mindset, equipment, and skills of the people and ships we study.