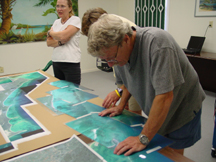 Dr Donald Keith explains the East Caicos coastline to Richard Coberly (pictured examining the photos in detail) and the rest of the team earlier this week. The photo montage will be displayed on the boat alongside more technological GPS visual wizardry.

By Nigel Sadler and Jackie Mulligan

9.30am: Don receives a call from Jean-Francois Chabot, captain of the Turks and Caicos Explorer that he will arrive by 5pm. He is also tracking the hurricane and has plans for worse case scenarios. The news is reassuring and the team begin to complete the final checklists

10.30am: Windward Media crew and UK journalist Tim Ecott along with marine archaeologists James Hunter and Jason Burns join Nigel Sadler for a tour of the inside of the old Prison. According to archives, the prison was the where Trouvadore survivors spent their first hours in Grand Turk, before the community protested and they were freed.

11am: The great Mac / Palm communication contest begins as Dr Anders Seim and Toni Carrell begin a process of formulating address book files. The process turns out not be so easy and takes up most of the rest of the day.11.05am: Dr Randel Davis or “Randy” arrives on SkyKing along with his four bags of medical supplies for the team…Most important part of his medical kit are the sea sickness patches, tablets and other remedies….Does he know something we don’t?

11.10am: Windward Media arrive at the Museum from the prison trip. No Nigel, no Tim and no archaeologists are with them.

11.30am: Nigel, Tim, James and Jason arrive from the prison trip. They had wrongly assumed Windward Media were in the prison still filming and so had waited for 20 minutes in the midday sun not realizing that the crew had actually slipped back to the Museum. A few ‘lighthearted’ words are exchanged. Tim says he is not bitter, though his nose does look a bit raw.

11.45am: The address book exchange program is still not playing ball. Toni and Anders continue. This kind of stamina and determination will be crucial to the survey.

11.50am: The team confirm some contingency arrangements should the T & C Explorer have to seek safe harbour at Turtle Cove Marina with sponsor hotels The Sands and Ocean Club Resorts. In addition Turks and Caicos Banking offers to assist the team, should they have to curtail the expedition.

12 noon: Tim and Jackie begin a bigger tour of Grand Turk and go and see Waterloo the 1815 year old Governor’s Residence. On the return Tim takes a photograph of wild horses and a donkey. Governor’s Beach, the 150 year old Lighthouse and a magnificent osprey standing guard. Tim tries to impress with his bird-spotting skills and takes a brief tour of Island House before stopping off for some drinks, another photo of a donkey, some M&Ms and a packet of peanuts.

12 noon: Meanwhile the team, remaining at the Museum, remember that the fridge in the laboratory is crammed full of buffet leftovers including chicken, cracked conch, battered fish, pizza. They stay in the laboratory for some time. Nigel walks in and and goes off to finish a 2 minute job and returns to find the delicious food buffet table has been replaced by medical supplies.

12.30pm: Tim and Jackie ignore their rumbling stomachs and stop at the edge of North Creek to see mangroves. On the way back, Tim cannot resist taking a picture of another donkey, a little one. Jackie seriously begins to wonder if he is preparing some artwork for a new line of Christmas cards.

1.30pm: Randy and Don discuss the project in the laboratory and catch up. The two of them have worked on a number of projects together over the years, including surveying Cotton Cay for Lucayan sites and the HMS Endymion in the Turks and Caicos Islands.

2pm: The archaeologists James, Jason and Randy are all requested to write a biography and pose for shots which they all are happy to do for the ‘Who’s Who pages – check for updates. Photos of Anders and Toni are added to the website…

3.45pm: The cars are loaded with empty fuel drums which will be filled with 600 gallons of gasoline. The 900 gallons of diesel is ordered for the T & C Explorer.

4pm: The first car loads are unloaded at South Dock

4.31pm: Nigel, James and Jason are the first to see the T&C Explorer on the horizon.

5pm: The T&C Explorer docks exactly on time. The whole team are impressed and Jean Francois becomes the hero of the day.

The next hour passes while the boat is refueled. Windward Media crew Veronica, Richard and Bryan get on board to spend their first night on the live-aboard. They are joined a bit later by Don and Toni, James, Jason, Randy and Lavardo.

7.30pm: Anders and Tim remain on land for dinner at the Osprey Beach Hotel and Jackie and Nigel return home to prepare the house for the potential hurricane.

Don calls to say pick up will be 5.30am and the boat will leave at 6am.