Dr Donald H. Keith – Trustee of the Turks and Caicos National Museum and lead archaeologist with Ships of Discovery.

Donald Keith is the Principal Investigator of the 2009 Fort St George Archaeological Expedition. Dr Keith is well known in the islands having recently directed the Search for the Slave Ship Trouvadore projects in 2004, 2006 and 2008. Dr. Keith has been the president of Ships of Discovery since its inception in 1989.  A diver since 1969, he has directed field research from the Bahamas to Panama and has participated in shipwreck investigations in more than a dozen foreign countries. From 1980-1988 he directed the excavation, analysis and conservation of the Molasses Reef wreck, the oldest shipwreck found in the Americas. The need for a space to house the conserved artifacts was instrumental in the establishment of the Turks & Caicos National Museum in 1991. The Molasses Reef Wreck is the museum’s central exhibit.  Dr. Keith is also a Trustee of the Turks & Caicos National Museum.

Toni Carrell is the Co-Principal Investigator for the 2009 Fort St George Archaeological Expedition.  She served as Co-Principal Investigator for the Search for the Slave Ship Trouvadore project in 2004, 2006, and 2008. She joined Ships of Discovery in 1990 after having worked as an underwater archaeologist for the National Park Service’s Submerged Cultural Resources Unit for many years. Carrell has extensive experience investigating shipwrecks from the 1600s to WWII throughout the United States and in several foreign countries. Her primary interest is hull construction. That led her to field directing the excavation of the La Salle shipwreck, La Belle for the Texas Historical Commission in 1997.  Carrell served as Chairman of the Advisory Council on Underwater Archaeology from 1995-2000 and represented the Society for Historical Archaeology during the UNESCO meeting of experts on the development of the international Convention on the Protection of Underwater Cultural Heritage, adopted in 2001.

Dr. Davis received his M.A. in underwater archeology in 1978. He has participated in numerous projects including the Padre Island Project, a 1554 Spanish shipwreck under the auspices of the Texas Antiquities Committee-1972; the Mombasa project, a 17th Century Portuguese frigate with the National Museums of Kenya-1978; a 1577 shipwreck in collaboration with the Bermuda Maritime Museum-1989; the Gallega project, a search for a Columbus vessel in association with Ships of Discovery and the Panamanian National Museum-1990 and 1992; The Nina project a caravel reconstruction with Ships of Discovery, Valenca, Brazil-1991; the Endymion site survey with Ships of Discovery and the Turks & Caicos National Museum; and the Trouvadore Project in 2004, 2006 and 2008.  He is also the project diving physician, certified by NOAA in hyperbarics.  His normal practice, however, is Emergency medicine and Tactical medicine in Phoenix, Arizona.

Robert Krieble is a Ships of Discovery team member for the 2009 Fort St George Archaeological Expedition. He joined Ships of Discovery for the 2008 Search for the Slave Ship Trouvadore and the US Navy Ships Chippewa and Onkahye Expedition. Robert has had a connection with the Turks and Caicos Islands since he was two years old, when his parents first visited the islands; he has lived there semi-full time since he was ten years old. Born in Canada, Quebec is home when not in the TCI. He graduated from Concordia University in Montreal. He has traveled widely, and races in road rallies on a regular basis. However, he is most happy when he is either in or on the water in some way. After participating in the Trouvadore, he volunteered for the 2009 Fort St George project. 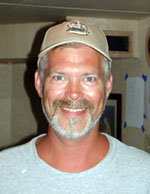 Dr. Neal V. Hitch is the Turks & Caicos National museum director. Dr. Hitch is a historian, preservation architect, and a museum specialist, holding a Master’s degree in Architecture and a Ph.D. in History. He specializes in 19th century life, culture, and architecture. From 1997 until summer 2007 he worked for the Ohio Historical Society, a non-profit corporation providing historical services for the State of Ohio. He is a historic housing specialist and has worked on some of the Society’s premier restoration Projects. Dr. Hitch is widely published and was awarded the 2002 Anne de Fort-Menares Award by the Association for Preservation Technology International for his scholarly work on OHS restoration Projects.

Will Allen
I am a photographer/filmmaker and have been working at it for the past 10 years (Will Allen Photo). I studied business and marketing at Concordia University, but found I was getting too busy with work to continue and so reserved the right to return in the future. I have since worked with IMAX on several 3D films around the world and National Geographic on different projects. In the past few years I have been working on the production of a few adventure travel shows for Discovery channel all the while building and opening a British Pub in Montreal, Quebec with a few partners. While I usually enjoy shark photography primarily and spending lots of hours underwater I absolutely love being able to be a part of the Fort St. George project. I feel honored not to have been voted off the island yet and hope that we accomplish what we have set out to do!

Elizabeth originally transferred to Tufts with the intent of pursuing a combined B.A./M.A in Archaeology. Put off by the Physics course required for the degree, she settled for a B.A. degree in history. Most of her professional experience is with non-profit organizations, focusing on public relations, marketing, event planning and instruction of young people. To the Ft St George Cay Project, she brings her curiosity, wry sense of humor, intellectual enthusiasm and lack of physical stamina. Elizabeth (and David) moved to the TCI, almost full time, in 2008. She has many interests including the TCSPCA and the TCFAF. By volunteering her time, it is her wish to give back to these small islands which have welcomed her so warmly. Plus, she gets to meet really interesting people this way! 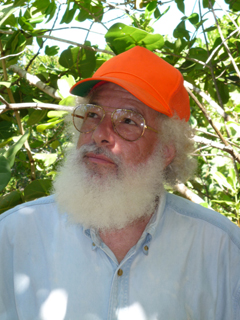 David Stone
David worked for 30 years as a professional nature photographer specializing in rare and endangered plants, taught nature photography, and ran photo workshops for 15 years. His stock photos were used in numerous publications such as encyclopedias, National Geographic filmstrips and textbooks. He was the principle photographer for the PBS Television Book “Crockett’s Victory Garden Landscape Guide.” In 1983 David created Photographic Solutions, Inc. to sell PEC-12 (R) film and print cleaner, which he invented in 1971. In 1998, he worked with Eastman Kodak to develop the Sensor Swab (R) for cleaning the sensor in their DCS digital cameras. In 2007 David semi-retired from PSI and moved to Providenciales nine months of the year where he volunteers for various projects for DECR, National Trust, the Ed Gartland Youth Center and the Turks & Caicos National Museum. His favorite gig is being Santa Claus for many of the islands’ institutions and businesses!