We found a cannon today.

Off of the north shore of Fort George there are cannons in the water. They are a snorkeling attraction.

Thomas Brown wrote that he outfitted the battery at Ft. George with 16 cannons in the 1790s. In 1967, the British Directorate of Overseas Survey completed an Ordnance Survey Map which located six cannons on a hand map of the cay. Three of the cannons are visible above the sand today. Five cannons were identified and measured by Dr. Donald Keith in 2008. 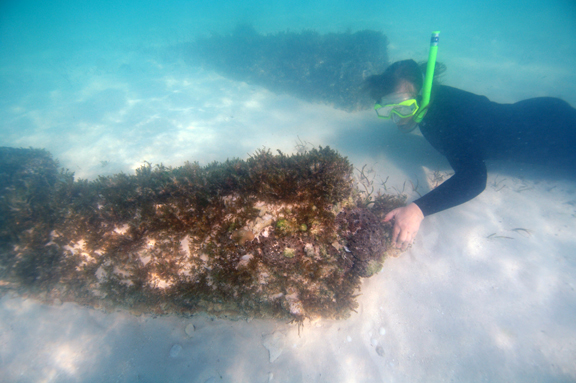 Toni getting a closer look at two cannons, one in the foreground and one behind her in the background.

On the second day of the survey we located five cannons and Will Allen got some great photos of them. At the end of last week we located cannon number six. This cannon was sitting just a few inches under the sand with the cascabel toward the sea and the muzzle toward the beach.

Today, we found cannon number seven. This cannon has never been documented at Ft. George before today. The magnetometer survey showed a large iron object located 50 yards south of the other cannons. At the end of the day we decided to do a little extra “water work” and set about trying to find the extra cannon. We found it by calculating a distance from the grids on the survey map and running a measuring tape off of the existing cannons. We marked an area at 64 meters and began to swim up and down the beach with a metal detector. About forty five minute later we hit a very large iron artifact.

The cannon sits six to eight inches under the sand, upside down, with the muzzle pointing back towards the other cannons. It is 4 foot eleven inches long. The muzzle boar diameter is 3 inches. This may have been a 4 pounder. It was an amazing find at the end of a long day. By tomorrow the cannon will have been consumed by the sand again, but now we know that it exists.